It doesn’t matter whether you know it as a railway, a railroad, a chemin de fer, or a 铁路, it’s a fair certainty that the trains near where you live are most likely to be powered either by diesel or electric locomotives. Over the years from the first horse-drawn tramways to the present day there haven’t been many other ways to power a train, and since steam locomotives are largely the preserve of museums in the 21st century, those two remain as the only two games in town.

But step back to the dawn of the railway age, and it was an entirely different matter. Think of those early-19th-century railway engineer-barons as the Elon Musks and Jeff Bezos’ of their day, and instead of space and hyperloop startups their playground was rail transport. Just as some wild and crazy ideas are spoken about in the world of tech startups today, so it was with the early railways. One of the best-known of these even made it to some real railways, I’m speaking of course about the atmospheric railway.

These trains were propelled not by a locomotive, but by air pressure pushing against a piston in a partially evacuated tube between the tracks.

Looking at the steam locomotives of the 20th century that form the bulk of those in preservation it seems curious that such a system might find favour when steam did such a good job of pulling trains. But the locomotives of the 1830s and 1840s at the dawn of the railway era did not have either the power or the traction of their later stablemates, and when faced with any significant gradient were often unable to tackle it.

The atmospheric system promised to solve this problem by replacing the relatively small mobile steam engine on the locomotive with a much larger one by the tracks, and removing the limited adhesion between the single driving wheels of those early locomotives from the equation entirely. A train would be simply pulled up the slope by the invisible hand of atmospheric pressure, something which seemed attractive to early railway companies not keen on the idea of digging expensive cuttings and tunnels to replace the inclines.

The atmospheric tube was made of cast-iron sections bolted together and mounted between the rails. Along the top of the tube was a slot for the piston rod to pass through, fitted with thick greased leather flaps designed to separate as the piston passed but to provide a vacuum seal at other times. It was successful enough to be taken up by several railway lines of the day, but why don’t we hear about it today? The answer is one with several layers, and is best answered by looking at those lines which proceeded as far as putting the system into practice.

Not All Atmospheric Railways Were A Failure 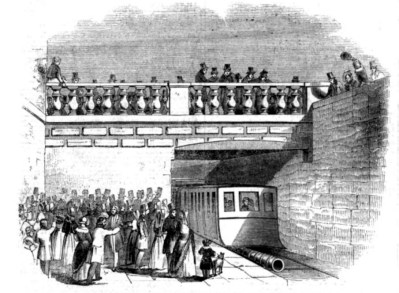 The Dalkey Railway as seen by the Illustrated London News (Public domain).

The first successful atmospheric railway was in Ireland, connecting the port of Kingstown (now Dún Laoghaire) near Dublin to the settlement of Dalkey, a distance of 1.74 miles. It opened in 1843 as an extension to the existing Dublin and Kingstown railway, and continued in operation until the mid 1850s when its traction was replaced by more conventional steam locomotives. Its success provided the inspiration for atmospheric traction in Paris on the railway from Paris to St Germain, the last 1.5km section of which was to have a gradient too steep for a locomotive. it opened in 1847 and like the Dalkey line continued in use until the advent of suitable steam traction which replaced it in 1860.

Both the previous two lines were very short sections in places that would soon become part of the populated suburbs of their cities, but those which followed attempted to bring atmospheric traction to longer distance travel. The London and Croydon railway was an 8.75 mile line whose local traffic shared tracks with express trains from another company, and it was proposed that another track be laid alongside the main line for these local trains, which would use atmospheric power. The first section opened in 1846 and showed promise in tests, but suffered a series of catastrophic pumping engine failures soon afterwards which caused its abandonment in 1847 in favour of steam power. 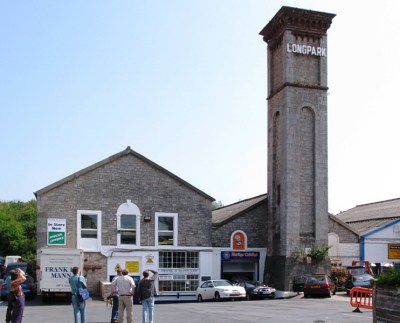 One of the most visible remnants of the South Devon Railway’s atmospheric traction, the pumping house at Torquay. Geof Sheppard (CC BY-SA 4.0)

Probably the most well-known and most ambitious of the atmospheric railways is the South Devon Railway, with the famous Isambard Kingdom Brunel as its engineer and part of his Great Western empire. It was planned that the entire 52 miles of the line between Exeter and Plymouth would be using the atmospheric system, but the first section to be completed in 1847 was that from Exeter to Teignmouth, a distance of about 13 miles. It was plagued by a series of problems like seals that froze shut in winter and dried out in summer, and by inadequate power from the series of pumpin engines set up beside the line. It was abandoned in favour of steam traction in 1848, and remains part of the main line to the West Country today. It’s this railway which defines the public history of atmospheric traction as one of the great Brunel’s failures, casting its successes in France and Ireland into the shade.

The atmospheric railways then are a mere footnote in engineering history where they live alongside such other interesting ideas as the maglev. It’s obvious that it’s an idea with potential and it’s certain that a modern version using the same pipes with perhaps a Neoprene or a silicone seal could be considerably more successful. But perhaps its time simply came and went, while it’s a good idea it had the simple misfortune to be not as good as a locomotive once locomotive technology was sufficiently developed. And that fate is something that’s happened to far greater inventions than an iron tube with a strip of leather along its top.