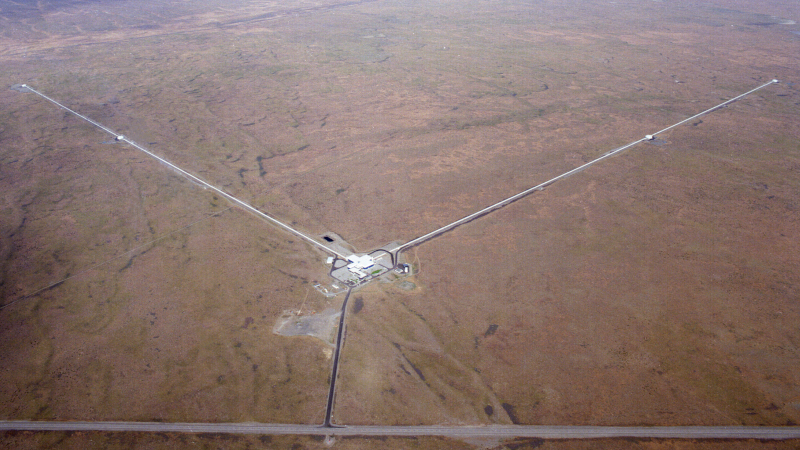 Gravity is one of the more obvious forces in the universe, generally regarded as easily noticeable by the way apples fall from trees. However, the underlying mechanisms behind gravity are inordinately complex, and the subject of much study to this day.

What Are Gravitational Waves Anyway? 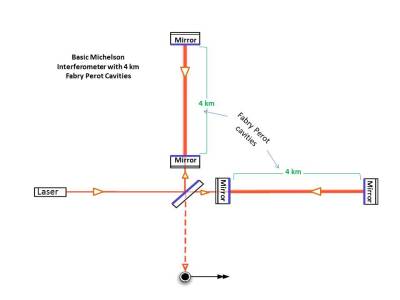 The basic layout of the LIGO Interferometer. Note the Fabry Perot cavities that enable the 4 km long interfereometer to extend its functional length to 1200 km.

Using conventional measuring devices isn’t viable for investigating such phenomena. LIGO has to measure changes in distance under 10,000 times the size of a proton (or around 8.4 x 1020 m) to determine the effect of gravitational waves on its detectors. It does this with an L-shaped laser interferometer. A laser beam is fired at a 45 degree beam splitter, which sends some light down one leg of the L, and the rest of the light down the other. At the end of each leg is a mirror, which bounces the light back. The light from each leg is then recombined and shined on a photodetector. As the length of each leg of the L changes, the light travels a different distance on each path.

When when the reflected light is recombined, an interference pattern is generated because the light from each path constructively and destructively interferes. This interference pattern can then be used to determine the length of each leg incredibly accurately, and thus used to determine if a gravitational wave has passed by, distorting space time around the interferometer. The longer an interferometers legs, the more sensitive it is to gravitational waves, hence each leg of LIGO’s interferometer is a full four kilometers long.

To further improve sensitivity, the interferometer features what are known as Fabry Perot cavities, which bounce the light back and forth down each leg 300 times before it reaches the photodetector. This has the effect of causing the laser light to travel 1200 kilometers up and down each leg before it reaches the detector, greatly increasing the sensitivity to minute changes in the size of each leg. 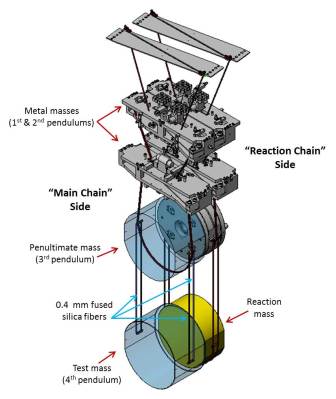 LIGO’s mirrors, known internally as “test masses”, are suspended from a four-stage pendulum by glass fibers, acting as a passive stabilisation measure against disturbances.

If building a gigantic 4km-per-side interferometer didn’t sound hard enough, don’t worry — there’s more to it. With the minute changes in distance being measured, even a slight rumble from a passing truck or distant earthquake could shake the interferometer assembly enough to ruin any measurements. To prevent this, an active damper system is used to stabilise the system. A variety of sensors detect tremors and environmental vibrations, and counter-motion is generated to keep things steady.

Additionally, the mirrors themselves are hung from a four-stage pendulum, called the “quad”, to keep disturbances to a minimum. The heavy 40 kg weight of the system’s mirrors, or “test masses”, also helps stability thanks to pure inertia. The entire light path is also kept at vacuum of one-trillionth of the air pressure at sea level, as errant air molecules bouncing around create noise that disrupts sensor readings.

The LIGO system is actually one of the world’s largest vacuums by volume, with the Large Hadron Collider in Switzerland being notable as a larger example. Achieving this vacuum is no mean feat. With the tubes first heated to drive out as much residual gas as possible, a series of turbo-pumps and ion pumps were used to drive down the pressure inside. It took a full 40 days to bring each tube of LIGO down to the requisite vacuum level. The interferometer arms have been maintained at vacuum since the 1990s; gate valves are used to seal off the corner chambers for maintenance and upgrades where necessary.

A 200 Watt Laser Isn’t Messing Around 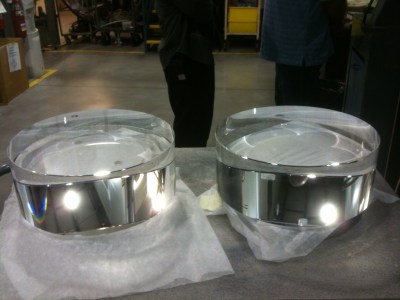 End Reaction Masses used in the LIGO interferometer. Each one weighs 40 kg and needs to be absolutely defect free for top performance.

The laser used in LIGO is also vital to the performance of the detector. With a stronger, more powerful laser beam, the signals picked up by the photodetector are less likely to be disturbed by noise. “We want as many photons interacting with the test mass as we can,” says Georgia Mansell, a post-doctoral member of the LIGO Commissioning Team. The Advanced LIGO upgrade fitted the facilities with a 200W laser system, though the full power level has not been used in practice yet. “In our last observing run, we had a problem where there’s a point defect in one of the test mass coatings… it absorbs a lot of heat and creates a weird thermal profile in the optic. In the end we used 40 watts in the last observing run.” In January 2021, the defective test mass was replaced, and the interferometer began undergoing preparations for its next observing run.

Somewhat uniquely to LIGO among large physics installations is that it isn’t a single facility. Instead, the entire interferometer assembly was built twice, in two separate locations —  the LIGO Livingston Observatory in Louisiana, and the LIGO Hanford Observatory in Washington. This has the benefit of allowing the system to correlate potential gravitational wave findings across the two locations. This can help with ruling out phenomena like vibrations due to traffic or seismic activity from genuine gravitational wave detections. 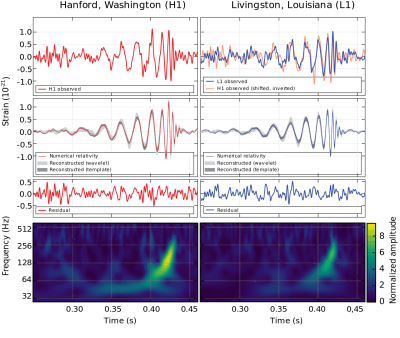 Signal traces of the first confirmed gravitational wave detection. T-shirts were made celebrating the find, and this author is lucky enough to have one.

The first direct gravitational wave detection was made on the 14th of September 2015, detected by both the LIGO observatories at the time. Since then, many more successful observations have been made, with the most recent observation run netting 55 detections before being curtailed by COVID-19. With the existence of gravitational waves confirmed by direct observation, work is ongoing to better understand the phenomena. Each detection comes from a different stellar event, and sheds more light on the underlying physical processes at play. The biggest detection yet was from May 21, 2019, likely due to the merger of two black holes. Data is compared between the two LIGO observatories, as well as a similar facility in Italy by the name of VIRGO, to help pinpoint the source of any observed waves.

Being able to detect gravitational waves enables the investigation of phenomena that were difficult to access with traditional optical or electromagnetic astronomy.

As more measurements roll in, and physical theories evolve, the data collected from the project may shed further insights on the very structure of the universe itself.

The LIGO experiment is a great example of the level of sophistication required to investigate the phenomena at the cutting edge of physics. Often, there’s a huge lag between theories being proposed and successful experimental confirmations; in this case, a full century went by before gravitational waves could be directly detected. It’s hard work untangling the secrets of the universe, but as always, scientists stand ready to rise to the challenge.

[Thanks to Georgia Mansell of the LIGO project who consulted on this article! Her livestreams working on LIGO’s interferometer can be seen on Twitch.tv.]