Ditch the yeast and the eggs for a 5-ingredient recipe for Easy Homemade Bread, including four flavor variations: plain, Everything seasoning, cinnamon-raisin and parmesan-black pepper. 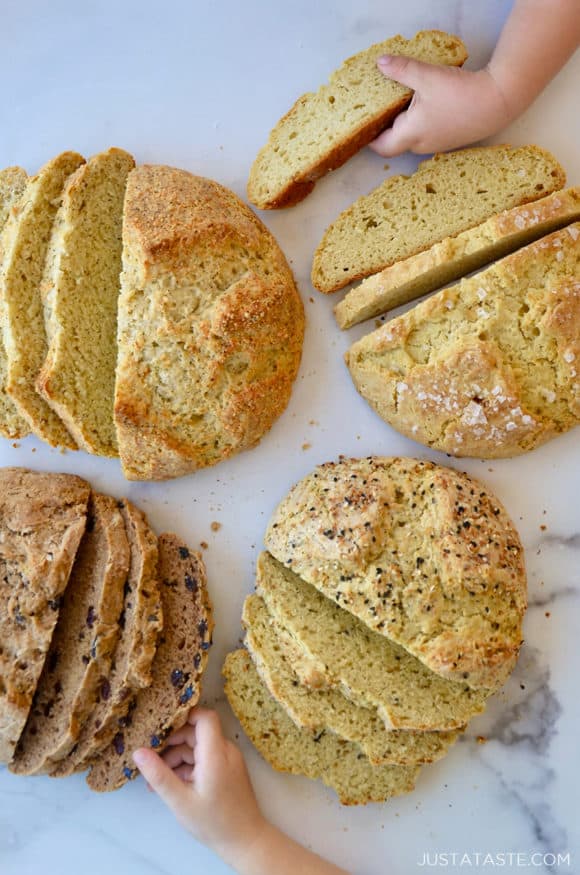 Homemade bread can be a daunting endeavor, but it doesn’t have to be! I’ve skipped the yeast and the eggs for this quick-fix recipe that takes just 10 minutes to mix up and 35 minutes to bake.

Translation: Easy Homemade Bread will be on your table in 45 minutes or less! 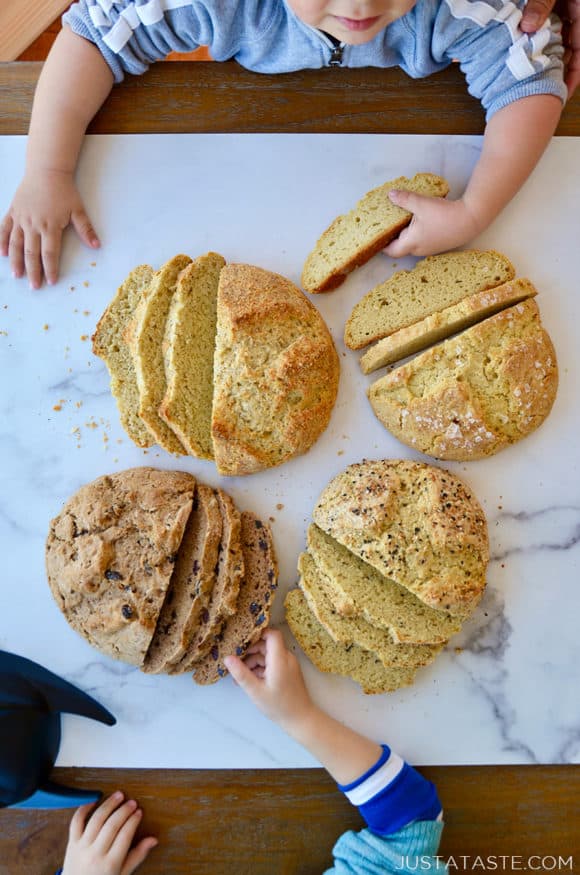 Can You Make Bread Without Yeast?

Yes! But it’s not your traditional light and fluffy bread (that’s over here), it’s a baking soda-based bread.

Before we get any further, I want to preface this recipe with a few notes: 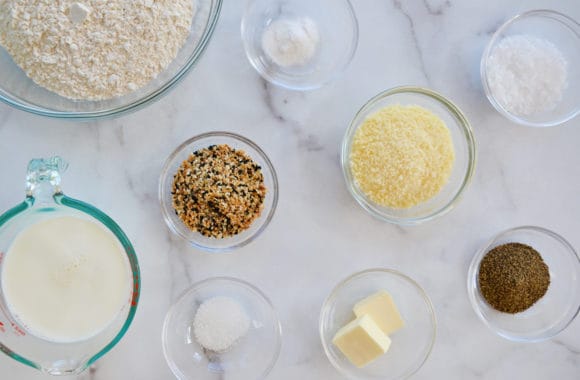 How Do You Make Soda Bread?

So let’s talk ingredients… we know there’s no yeast and no eggs, so what exactly is this Easy Homemade Bread made with? Just five simple pantry and fridge staples:

This basic recipe will yield a regular ol’ loaf of soda bread (meaning no flavorings or seasonings). 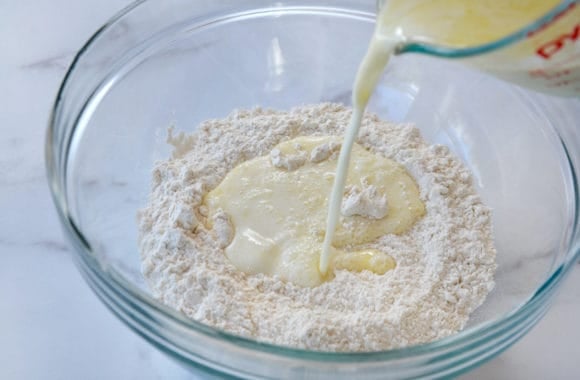 What Can I Substitute for Buttermilk?

If you don’t have buttermilk readily available, you can easily make your own! Add 1 tablespoon of lemon juice or vinegar to a liquid measuring cup, then pour in milk (any variety) up to the “1 cup” mark. Stir the mixture then let it sit for 5 minutes until it curdles and thickens slightly. Proceed with the recipe as directed. 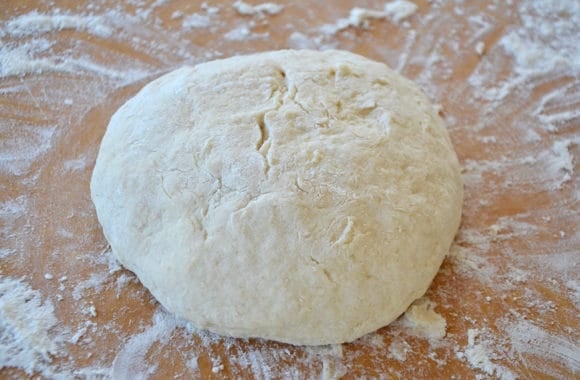 What Other Easy Homemade Bread Varieties Can I Make?

Once you whip up a loaf (or four), don’t just stop there! Soda bread makes for fantastic grilled cheese, as well as homemade croutons and even bread pudding.

Toast toppings are also endless! I like the below combos: 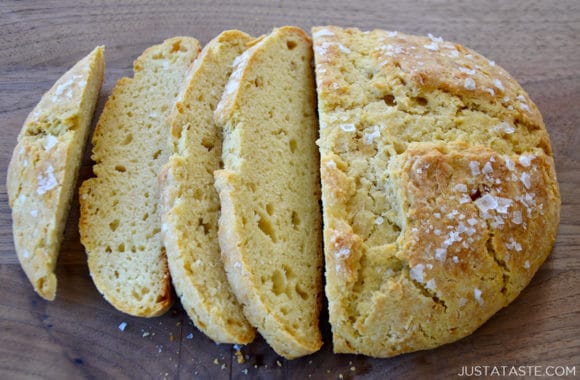 How Long Will Soda Bread Last In the Freezer?

The safe answer is “up to two weeks.” Because this is homemade bread, there are no preservatives. If you do want to freeze the bread, let it cool  completely then wrap it very securely in plastic wrap. Pop the loaf into a sealable plastic bag then squeeze out as much air as possible before sealing the bag shut and stashing it in the freezer. 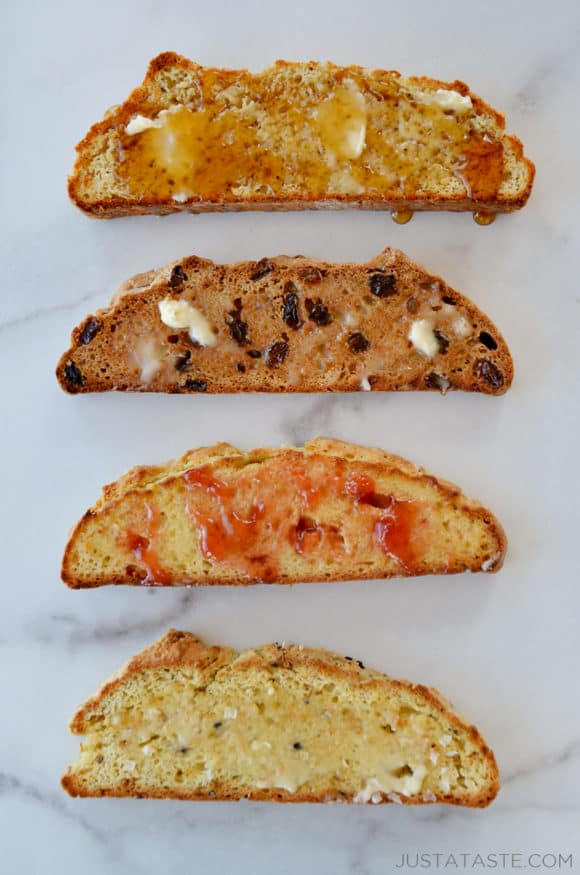 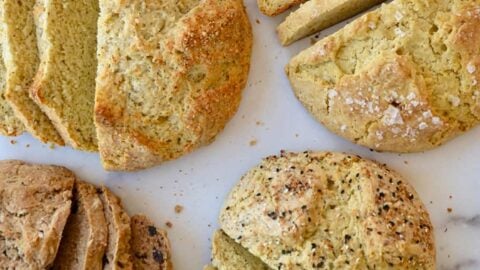 In a large bowl, whisk together the flour, baking soda and salt.

Add the buttermilk and 2 tablespoons melted butter and mix just until combined.

Generously flour your work surface. Scrape the dough onto your work surface then sprinkle the top of it with additional flour. With very light pressure, turn the dough so that it is coated on all sides with flour then knead it a maximum of eight times. Shape it into a 6-inch domed round.

Using a sharp knife, cut a large “X” across the top then brush the top with the remaining 1 tablespoon melted butter.

Bake the bread for about 35 minutes or until it is no longer doughy in the center. Remove it from the oven and set it aside to cool before slicing and serving.

No buttermilk? No problem! Add 1 tablespoon of lemon juice or vinegar to a liquid measuring cup, then pour in milk (any variety) up to the “1 cup” mark. Stir the mixture then let it sit for 5 minutes until it curdles and thickens slightly. Proceed with the recipe as directed.

To freeze the bread, wrap it securely in plastic wrap then place it in a sealable plastic bag. Remove as much air as possible and seal the bag shut. Freeze the bread for up to 2 weeks.

For Everything Seasoning Bread:

Stir 3 tablespoons white sugar, 2 teaspoons ground cinnamon and 1 cup raisins in with the flour; brush the top of the loaf with 1 tablespoon melted butter; bake as directed.