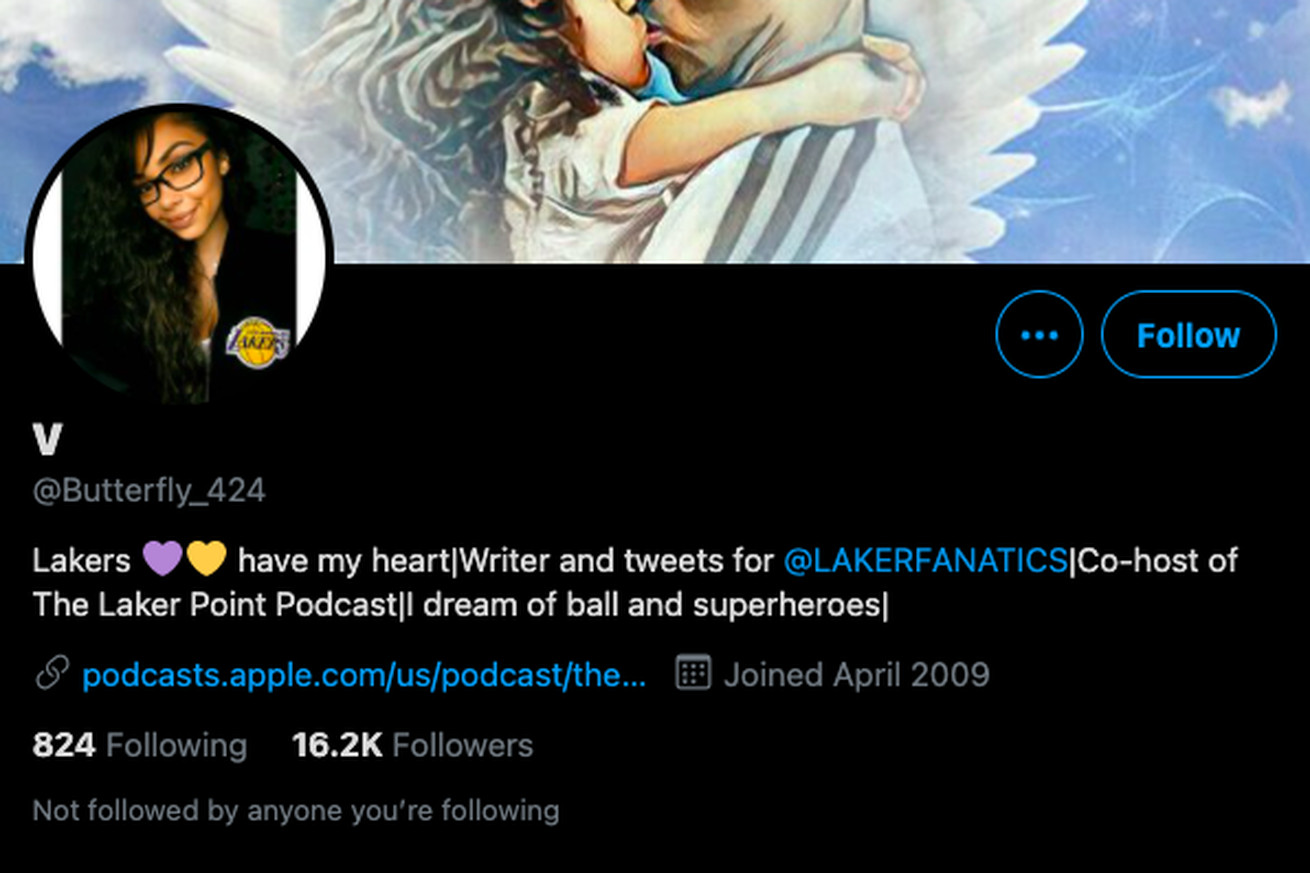 Lakers Twitter gave us one of the most bizarre catfishing stories you will ever hear.

Lakers fans were worried. Vivian, the super fan they knew from Twitter, was missing somewhere in Los Angeles and nobody had a lead on her whereabouts. To make matters worse nobody knew what her hair currently looked like, a product of a wig she was likely wearing due to her leukemia treatment. Some searched the streets, others amplified the message to find her, even Markieff Morris of the Lakers tweeted out info, trying to assist in the search.

Hours later, news emerged that she’d been found. There was a collective sigh of relief, but while exhaling people started questioning about what happened. Questions became doubts, an investigation, and now the entire fanbase is convinced they’ve been catfished by a man pretending to be Vivian, and potentially aided by a podcaster trying to make a name for himself.

We’re left with one of the most-bizarre catfishing stories in sports since Manti T’eo.

Who is Vivian Flores?

Vivian Flores joined Twitter in 2009 and steadily built a following on the platform giving her analysis of the Lakers. It wasn’t until 2020 when the account grew exponentially following Kobe Bryant’s death, with Vivian telling fans she was at the Staples Center for Bryant’s memorial, and how it evoked the same feelings of loss as when her father died. Fans followed along as she revealed she had leukemia, sending their wishes as a speedy recovery — but above all else Vivian didn’t want to focus on her illness, but rather the Lakers, the team she loved so much.

Fans identified with the emotion, and the strong takes about the team. Her account, @butterfly_424 started to blow up and amassed 16.2K followers. This led to Vivian developing a working relationship with podcaster Josh Toussaint, who asked her to co-host the “Laker Point Podcast.” Her following, paired with the podcast led many to consider Vivian a must-follow on game nights to get her take on performances.

Now here’s where it gets complicated …

People knew Vivian, but nobody had met her in real life. There were plenty of plans and empty promises for meetups at games, but Covid appeared to be the perfect foil to ensuring nobody ever met the podcaster in real life. Even Toussaint, Vivan’s co-host claims he never met her in person — but in hosting a show together there was never really a doubt that Vivian was real, and was the woman posting photos of herself repping the Lakers.

Everything changed in the early hours of April 19 when Toussaint posted (in a now-deleted tweet) that Vivian was missing, seeking details on her whereabouts. Dozens of people followed along, all in an effort to find Vivian.

RT @josh2saint: Hey Lakers family,- Vivian Flores (@Butterfly_424) is missing- 5’5”- May or may not be wearing a wig bc she’s going through leukemia treatment- From Santa Monica- DM me if you have a lead or may see her- Love you all and stay safe https://t.co/Mw4YL9y4Ru

It went so far that Toussaint claimed the Lakers were trying to help find her as well, posting the screenshot of a DM with the team’s account.

This is bro? You photoshopped this??? pic.twitter.com/MyAcYRbPbn

A few short hours later Toussaint posted that Vivian had been found and that she was safe. Many were relieved, but some felt like the whole situation was a little too odd. One of the biggest Lakers fans on Twitter had vanished for a few hours, concern for her went viral, got so big that it couldn’t be controlled. then Vivian reappeared as quickly as she left.

Everything felt so convenient that internet sleuths started digging though everything related to Vivian, and that’s when things got weird.

Another prominent Lakers fan on Twitter, @itskingsbruh claimed that he has been dating Vivian before learning he’d been catfished. This began the discussion of whether Vivian was real. Soon people noticed things.

Photos Vivian posted of her playing basketball turned out to be photoshopped:

Did a reverse image search on one of “Vivian’s” photos and… pic.twitter.com/6vqysN6ILL

Allegations were levied against Josh Toussaint, claiming the podcaster had invented the whole Vivian story as a way to get more attention to his podcast. But others, who know Josh, said that wasn’t the case — and really he’d just been catfished. It left him feeling angry about the whole situation, and looking for answers.

Still haven’t gotten a goddamn explanation. Thought I trusted someone and learned my lesson. Tried to help a friend I thought was in peril. I was duped like yall and feel bad I was a pawn. Such garbage. Logging off for awhile. Stay safe out there. You never know ✌️

Our first interaction. She claimed to be at Staples for Kobe’s memorial service back in February 2020 pic.twitter.com/TeYE0UIuiA

The assumption had moved from Josh creating Vivian for his show, to him being the victim of a larger scheme. It turned out more people had been catfished too, including a man in 2019.

The catfish Vivian story continued. My friend was catfished by her in 2019 then I did some investigating. Idk what app “Vivian” uses to make these vids.#catfishVivian #catfish pic.twitter.com/XAxgi510jH

That’s the big question right now, and honestly there’s no concrete answer. If we assume Josh didn’t know about this at all, then it could be a random person online having fun with a sports fan — but there’s speculation it was Josh’s close friend Waleed Khan.

Khan had appeared in videos with Josh in the past. The two even posted an emergency live video last night explaining the potential catfishing by Vivian.

for everyone thinking @josh2saint created vivian, he did not. he got catfished it’s embarrassing who openly admits to that? he did not impersonate a random sick in the head individual who played laker nation and preyed on their concern and worry about “one of their own”

However, as the two continued to defend the idea that Josh was innocently catfished the internet investigation expanded to include Waleed, and people began noticing a few things. When Vivian’s voice was pitched down it sounded almost exactly like Waleed’s.

Then came the “proof” that Vivian was real.

Through all this Vivian was trying to tweet through it, claiming that she was real and this was all a misguided witch hunt. On Tuesday afternoon Vivian decided to post “proof” that she wasn’t a catfish, a short video holding up her name and saying “thank you” to the die-hard fans who always believed in her.

There was just one problem …

I grabbed it because I knew this would happen so here you go pic.twitter.com/CFRFrjOKlu

The extremely real and totally not fake Vivian spelled her name “Vivien” on the sheet claiming her identity. So, unless she’d forgotten how to spell her name this was a weird twist. With this information people looked back on Josh’s tweets and noticed that in an attempt to prove his innocence he posted an image of a conversation he had with Waleed, and Waleed also spelled Vivian’s name wrong, also using an “e” instead of an “a.”

look at how joshs friend spelled her name, and people have been saying his friend runs vivs account pic.twitter.com/5BYhuTqh8b

The spelling SNAFU led to Vivian’s account quickly being deactivated, and questions still swirling. Josh remains confused by the whole situation, while Waleed has not tweeted since the latest fiasco began, prompting more people to posit that he was running the catfish all along, possibly without his friend’s knowledge.

Josh is fighting back at those who are saying Waleed is Vivian, indicating he believes the allegations are racist.

Apparently, Waleed is this person because he looks like he’s from that region (Pakistani descent) even though he has a lisp and is completely American. Maybe some of you should check your preconceived biases?? https://t.co/Oo9ANiAbzT pic.twitter.com/qbNZnFB3VA

We might never know what exactly is happening with this story.

Never underestimate the power of the internet.

The full story of Vivian Flores may never be known. Is she real and this is all one giant mistake? Was she created to boost exposure for a podcast? Did a man dupe his best friend with a fake woman? Who was that holding up the misspelt sign? Lakers fans are desperate to know, the internet is now invested, and we might never get the answers we seek.

For now though, everyone is having fun with this weird and ludicrous potential catfishing that has spread so far even other NBA teams are taking notice.

we’re not buying it, Vivian… pic.twitter.com/d3xV8HQb8X

The one lesson in all this is that trying a scheme like this on a huge group of people will always backfire. It might be easy to catfish one or two people, but expand that out to an entire fanbase and they will find you, they will expose you, and you will hastily delete your own account after spelling your name wrong.

What a weird world we live in.